Posted on November 2, 2015 by rainshadowfarm

I moved to this desert to make a life with someone who is now long and willingly gone.

I am the sole owner of a property that we once picked out together.

When the modified grant deed was put into my name alone, I saw a 19th century novel in a few of the opening words. “My Name, who acquired title with her former spouse as married woman…hereby grants to My Name With Middle Initial, an unmarried woman”…and then comes the description of the property. Nice.

When I think of this it does make me smile. So antiquated. And so hard-won.

This property, sadly, has the potential to drain me dry since I am effectively very underemployed and may remain so the rest of my life.

I’m getting by, but, to be honest, just barely.

I complain to myself sometimes about the fallout of the ex refusing to pay court-ordered spousal support.

Again, that’s one of those things that is what it is. And I have to make my peace with it.

As much as I enjoy teaching and the other things I may put out there for more or less (or even no) money, there’s really no security in my financial life. When my youngest briefly collected SSI, I felt like I had a safety ledge between us and free-fall. That’s gone now. I’ve had to make my peace with that, too.

Summer in the high desert is the most difficult season: for me and for the farm. The plants and trees that aren’t entirely native to this place wilt. I wilt. When summer hits, I have a desire to hit the road.

But now summer’s over. Nights are longer. It is much cooler. And tonight it rained. In fact, the rain in town tonight felt icy.

Whenever summer ends, the urgency to flee dies down a little. Over the last four years, fall, winter, spring, and what might be called “Climate Change Early Mild Summer” have kept me in place.

I have a little list of “reasons to go, reasons to say” in a notebook. I don’t look at it much anymore because I’m pretty sure regardless of the list, I’ll be leaving. I’m just not sure when. It will probably be during a full-on high desert summer.

At least, a summer is probably when I’ll try to put the house on the market (if there’s any equity in it at all, which there isn’t yet) or arrange a short sale. Three years ago my attorney said “walk away.” And maybe that’s what I’ll finally do.

Maybe this is the midlife crisis I should have had when I was dealing with someone else’s. Shall I have my own?

I’ve been figuring the soonest I’d leave would be in a year or so.

Something happened last night that is moving me along the relocation track a little faster.

We had a prowler last night. Someone came up to my youngest daughter’s window, casting a shadow and not being entirely quiet. Today we found that they’d broken off an entire cluster of Opuntia basilaris aka beavertail cactus. 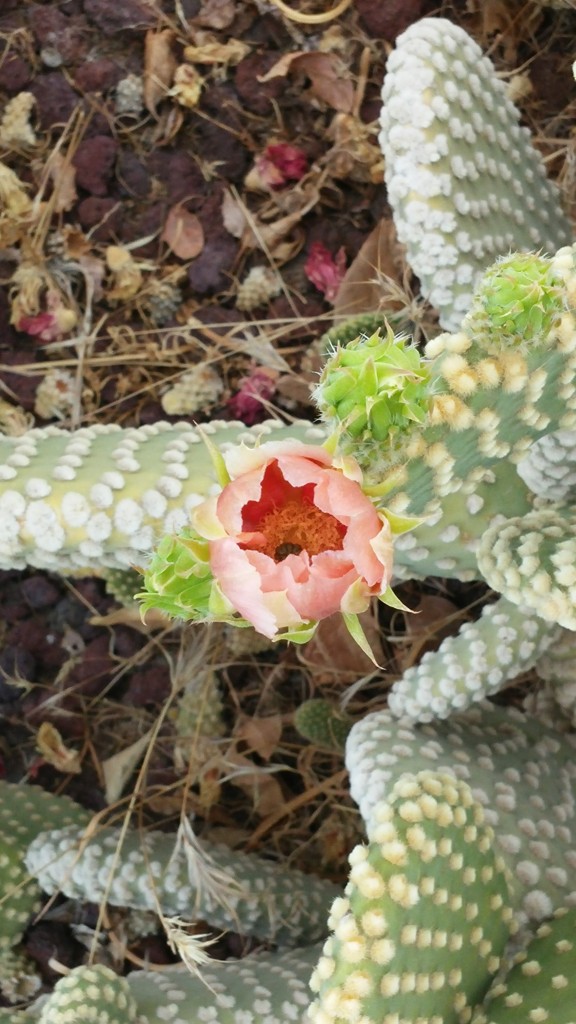 Maybe the prowler has a leg full of stinging glochids from the downed cactus.

It was unnerving. Hell, it was downright scary.

This was not our first such incident.

As I mentioned in the old post, above, we’ve had pilfering and theft outside – so have many of our neighbors without fences. Sturdy fences cost money. I guess I’m going to have to find a way to spring for it. If we can wait, there’s income tax refund time.

Last night was too much. Someone lurking near my youngest daughter’s window and moving around the cars. Even if we move in the fairly near future, I have to get the front finally fenced.

Meanwhile, shall I procure a shotgun and some birdshot? Now that should be a real piece of cake in rural California. I could probably go to WalMart tomorrow and put it on credit. You should see the articles and blogs and Youtubes discussing the relative merits of birdshot vs buckshot. I’ll leave it to you to see what happened to Dick Cheney’s friend when the former VP shot him in the face with a bunch of birdshot. People have lost their minds.

I teach anthropology, am an archaeologist, a drylands agroecologist, community educator, and a single mother of eight grown kids. I currently own and operate an educational and research farm in the southern Mojave Desert, Rainshadow Farm. I'm 100% West Virginia hillbilly. Not necessarily in that order.
View all posts by rainshadowfarm →
This entry was posted in family, Life changes and tagged gray divorce, micro-eco farming, mojave desert, weather, women farming, working class academic. Bookmark the permalink.

4 Responses to somewhere to go