on the bad days…

Posted on September 6, 2015 by rainshadowfarm

I was just past 50 years old. Felt very young. Felt like I was on my way.

Life was full. Lots going on.

I was moving full-speed toward a future I thought I knew. I had my wagon hitched to two stars, both men, both unreliable toward me, as it turned out.

One was on the homefront saying he loved me. Saying he was sorry. Saying we’d make it through. He was my lover, my husband, the father of all of those kids. I’d been with him 28 years at that time.

One was on the workfront saying he had a plan to get me tenured. Saying we might be business partners. Saying let’s write books and articles. He was my friend and my boss, essentially. His wife was my friend.

What was I thinking? Entangling myself so totally with two devious men?

I was thinking life was pretty sweet. Mostly. All of those “I’m sorry’s” were being said for a reason. That part was not so sweet. But I shoved that part aside, each time.

There were challenges. But I was used to challenges. There was deception. I was good at denial.

What did I really want 10 years ago?

There was a future I thought I could see that I wanted.

Minus the deception. Minus the bullshit. Minus the little clues I might have noticed, and chose to ignore, pushing on. I cushioned myself with my denial.

When did the facade really begin to crack? Not little cracks that I could easily patch, but the big cracks that ended up bringing it all down?

Which indiscretion, which affair was the breaking point at home? None. None, until the very end.

And at work? At work it came in stages too. Deep disapproval of my PhD program. That set me off-kilter. The words, “you’ll never be full-time” began to put an end to my denial at work. What finally pulled the comforting blanket of denial away from me was being summarily let go from the work I’d trained years to do. Oh, and being so easily replaced. My heart failed, literally, and I was shoved out into the cold on my own. No need to keep me around. No need for any of my skills. No need.

My judgments were so skewed.

At home things moved with subtlety. No, that’s wrong. Things were subtle and shocking at the same time. At home the apologies stopped. The current affair accelerated. Wrapped in my useless sense of shame, I thought I was stupid to miss the progress of a covert affair of four or five years duration. Believe me, that sense of shame is dissipating. It’s useless and not productive, not even attached to reality. Women sometimes feel we have to know everything that’s going on in our relationships even when we couldn’t possibly. I’ve been shamed by a few people who think I failed in my marriage because I didn’t see it coming. Let those people try raising eight kids, working from home, working from work. Let them try finishing two graduate degrees and begin a new sort of work direction. Let them try, let them work at sorting it all out, and then let them go fuck themselves.

At home, the coldness leaked out of his words, his attitudes, his eyes.

Desperate how? To leave and to not leave. To make things right somehow. All at once.

There was the night he stood in a restaurant and insulted every person in my PhD program including my dissertation chair. That’s a story in itself.

Sure, I should have expected it.

And then there was the night he walked away. Away from me. Away from the kids. He let me go to work and he left, refusing to talk to the younger kids who were at home.

I should be glad I escaped a black hole. Only part of my soul was sucked away into that void. Part of me was left here. The hoped-for future of a certain kind of happy family life, work worth doing – all stripped away.

But. I’m still here. Still standing, as we say. Still able to move into some kind of a future.

Some days I feel the shift. The adjustment to this new life. Sure, so much to be thankful for. And some days I feel lost. That’s the kind of day I woke up to. So much water under the bridge.

I don’t think about going back. But on the lost days, I stand here, puzzled.

Sure I have plans. I’m moving along. I’m loving. I’m letting it go.

These days, that’s the worst of it.

What’s the worst of it? Feeling lost. Being financially scared. Being vocationally disillusioned, deeply. Being older. And not much wiser but with a peace I had only rarely known as a married woman.

And when the bad day passes, how does this all shake out? Feeling found, feeling newborn. Knowing I can make it through somehow. Being older is just what it is. Maybe not much wiser but with a peace I had only rarely known as a married woman. Knowing when I’m happy, I’m not being resented.

So it could be worse, couldn’t it? 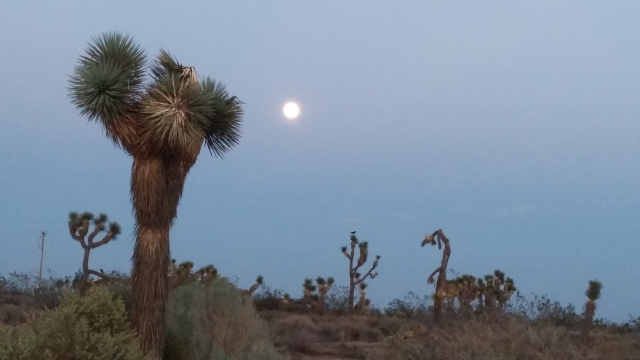 That desert moon, was it just last week?

I teach anthropology, am an archaeologist, a drylands agroecologist, community educator, and a single mother of eight grown kids. I currently own and operate an educational and research farm in the southern Mojave Desert, Rainshadow Farm. I'm 100% West Virginia hillbilly. Not necessarily in that order.
View all posts by rainshadowfarm →
This entry was posted in disability, family, gratitude, gray divorce, Life changes, resilience and tagged academentia, adjuncting, congestive heart failure, disability, gray divorce, peripheral neuropathy, resilience. Bookmark the permalink.

6 Responses to on the bad days…