I’m thinking about doing some more intensive habitat restoration right here at RSF. There are native plants that grow within a mile or two of here on undeveloped land. Harvesting some seeds is probably fine to do, if the land is not marked off.

I’ve been experimenting with growing local native herbal plants and plants that produce seed as food.  People often ask me why I leave the back and side of the property undeveloped. why I don’t farm it more. I really want a living ethnobotanical zone, a high desert native plant garden, as undisturbed as possible. 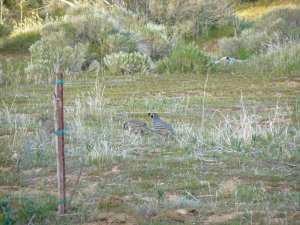 Quail behind orchard by Erin Ward

For native plant geeks like me, this is what I’ve found on our property (the rest of you probably ought to scroll on down):

The following are native plants and shrubs at RSF that may or may not have medicinal or food value. That can be easily checked:

I’ve planted Desert Willow (Chilopsis linearis), a native shrub, for the flowers, shade, and habitat.  Also I’ve planted California poppy (Eschscholzia californica)which is reputedly medicinal. Those of you who have been here know that we have a cactus food garden which is filled with native varieties given to me by friends over the years, from their own Victor Valley properties. California Juniper (Juniperus californicus) is present on neighboring properties and would likely do well planted at Rainshadow Farm. It is terrifically difficult to raise from seed (although the seeds have probably been, or are about to be, pollinated by now). I know that neighbors would allow me to take a few of the female seed cones. On the other hand, there is a plant nursery in San Diego County that sells California Juniper. Up until now, all attempts to sprout the serviceberry (Amelanchier utahensis )seeds given to me by Gene Anderson have not been successful. I still have a large handful frozen and ready to give a last try. This would be an amazing shrub/small fruit tree, if we could get it growing in the high desert.

Many varieties of sage grow all around us and the seeds can be gathered to bring to RSF. When we’ve walked in the area, we’ve seen lovely and useful native plants whose seed could be planted here. Most of these could be experimented with as seed foods.

I have a few ideas for some other trees, shrubs, and plants that would do well here but are not a possibility until fall. Some of these are foothill and mountain plants and shrubs. Example: local elderberry (Sambucus mexicana) and chokecherry (Prunus virginiana) from the Wrighwood area.

Also we have rather well-established non-native plants on the such as the annual Filaree (Erodium cicutarium), wild mustard (Brassica spp.), thistle (Cirsium spp.), Foxtail Brome (Bromus madritensis ssp. rubens) and Cheatgrass (Bromus tectorum). These have followed the progression of agriculture into the valley and the last two have come up here also with residents’ lawns and animal feed. The grasses I do pull out because they are vastly opportunistic and will choke the life out of our gardens and take over the habitat areas of native bunch grasses. Filaree, the wild mustards, and thistles may be of some use but I’m not sure how useful they might be. They certainly are all over the Victor Valley now, so it’s worth looking into.

I teach anthropology, am an archaeologist, a drylands agroecologist, community educator, and a single mother of eight grown kids. I currently own and operate an educational and research farm in the southern Mojave Desert, Rainshadow Farm. I'm 100% West Virginia hillbilly. Not necessarily in that order.
View all posts by rainshadowfarm →
This entry was posted in dryland restoration, sustainability education, sustainable agriculture and tagged agricultural education, dryland restoration, environmental education, farm-based learning, micro-eco farming, sustainability education. Bookmark the permalink.